Contribution to the Accumulation of Judicial Precedents

Against such historical background, Iwata Office was commissioned to represent concerned parties and/or litigants in numerous major and significant cases. Out of them, number of cases in litigation resulted in setting judicial precedents in the Supreme Court. There was also further increase in the number of requests for legal opinions during this period and some of the copies of these opinions are still kept in our office now. Records that we can confirm today show that over the years between 1922 and 1935 Iwata Office annually dealt with from two to five litigation cases that led to setting judicial precedents in the Supreme Court and produced at least 60 legal opinions per year. Among them are the cases of historic significance in the corporate legal practices in Japan.
Many young attorneys at law joined Iwata Office over this period and they received training and guidance from Dr. Iwata in person. It was during this period that Iwata Office, in addition to representing many and various litigants in civil and corporate cases, accepted the responsibility to be in charge of the procedures regarding the settlement of debts and credits of Kuhara Zaibatsu (a financial conglomerate which had been established by Fusanosuke Kuhara upon business success of Hitachi Mining and other entities and which was in a financial predicament in the midst of post WWI recession). 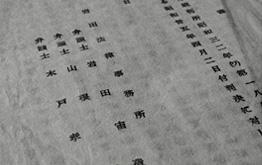